I’ve always been fascinated by bread rising.  Too intimidated to try making my own bread, but fascinated just the same :)  This post is about my first attempt at homemade bread and what The Babe and I learned. It really wasn’t that hard and I quickly figured out that yeast is the magic in the biology of bread.  How does it all work?  Let’s start baking and learning! 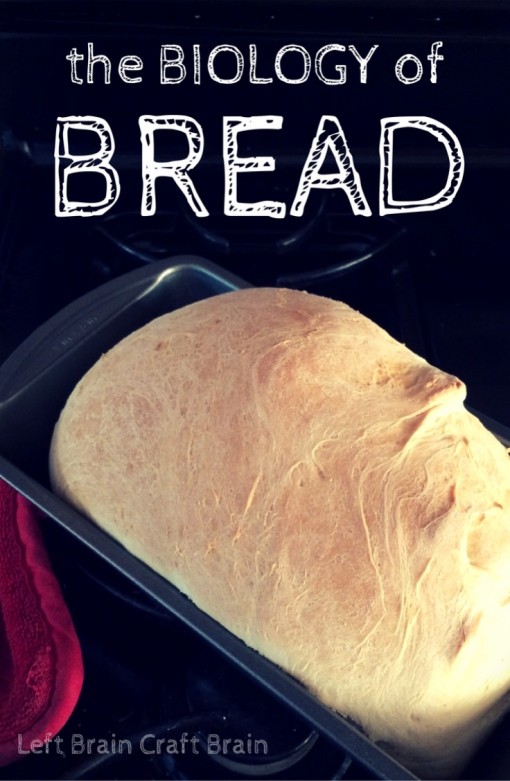 I picked this Amish White Bread from allrecipes for my first attempt.  Not because I don’t love me some wheat bread or crusty sourdough or airy ciabatta, I just thought plain white bread would be the easiest.  The Amish bread is easy to make, a bit sweet and The Babe could not get enough of it, so I highly recommend this recipe.

Yeasts are single cell microorganisms in the Fungi kingdom.  Yeasts are important in the world of baking, alcohol production and even the pharmaceutical industry as they help scientists create new medicines.  Yeasts survive by eating carbohydrates like fructose, glucose and use their enzymes to break the sugars down into usable components.  This sugar breakdown is called fermentation and converts carbohydrates to carbon dioxide (CO2) and alcohols.

Here are some pictures of the fermentation process of baker’s yeast proofing.  First you see the dry yeast, then the yeast mixed with water and sugar (carbohydrate food) and finally the yeast after about 5 minutes.  You can see how the yeast has released carbon dioxide from the bubbles it created.  And when you try it yourself, you can smell the alcohol in the brew!

Now that you know what yeast is, how does yeast work in bread?  You know all that carbon dioxide you saw in the bubbly yeast brew?  Those CO2 bubbles create gas pockets in the dough that help the bread dough rise.  When the bread goes into the oven, the yeast continues releasing CO2 and the gases keep expanding because of the heat.  But it’s kind of like chewing gum.  If the bread doesn’t have a strong, elastic network, the bubbles will pop.  The flour in the bread creates just the right kind of elastic material to keep those bubbles from popping.  Check out the difference in the dough volumes below after just half an hour of fermentation. 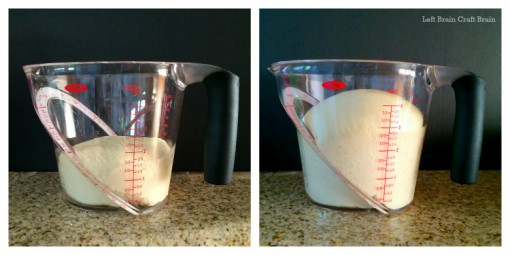 What is Gluten and Why is it in Bread?

Wheat flour’s elastic network is made up of two proteins from the grain’s endosperm.  These proteins, glutenin and gliadin, are called gluten when they combine. Mixing gluten with water in bread dough forms a gum-like stretchy substance that can hold gas bubbles.  We knead the dough to help the gluten network become more and more elastic.  The elasticity increases because kneading 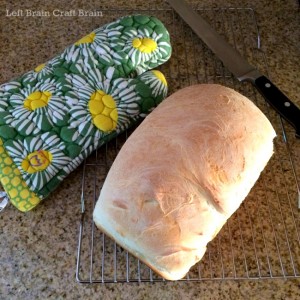 causes more glutenin to bump into gliadin, creating more gluten.  The more gluten, the stronger the gas bubbles will be and the more the dough will rise.  As the bread bakes, the gluten hardens and the air pockets stay, creating that fluffy, airy, soft texture we love in bread.

Bakers are experimenting with new gluten free elastic networks for baked goods as gluten sensitivities and allergies are becoming more prevalent.  It takes a mixture of these replacements to match the unique characteristics of wheat.  Standard wheat flour can be replaced with mixtures of things like potato starch, garbanzo flour, tapioca flour and sorghum flour.

I’m telling you, this was my family’s favorite Left Brain Craft Brain project so far.  Don’t be intimidated by making bread like I was! Even the first loaf that wasn’t as pretty as some of these pictures still tasted pretty dang good :)  If you or your kids like learning while cooking (or ummm, eating while learning) check out some of my other food education projects like Polymer Science 101: Homemade Fruit Gummies or The Science of Ice Cream. 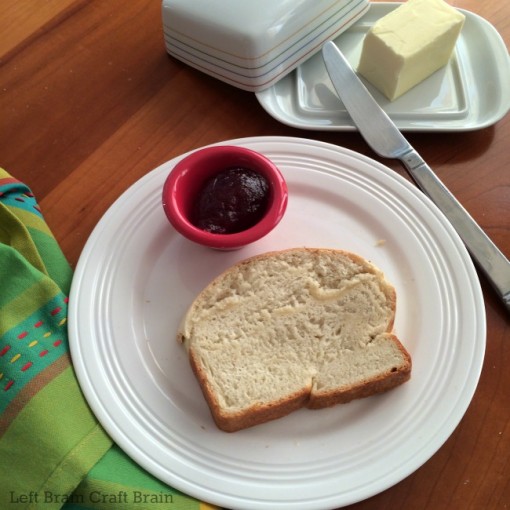 Love cookbooks like me?  Here are some highly rated bread cookbooks to check out. {affiliate} 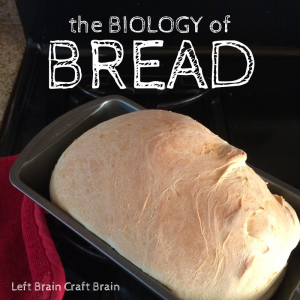 22 thoughts on “The Biology of Bread”