We’re about to have an epic experience! A solar eclipse!! Solar eclipses are an amazing time to learn a little bit about the sun, the moon, the earth, and the paths they take as they orbit around each other. These 10 Solar Eclipse Activities are a fun way to add some creativity to the science. 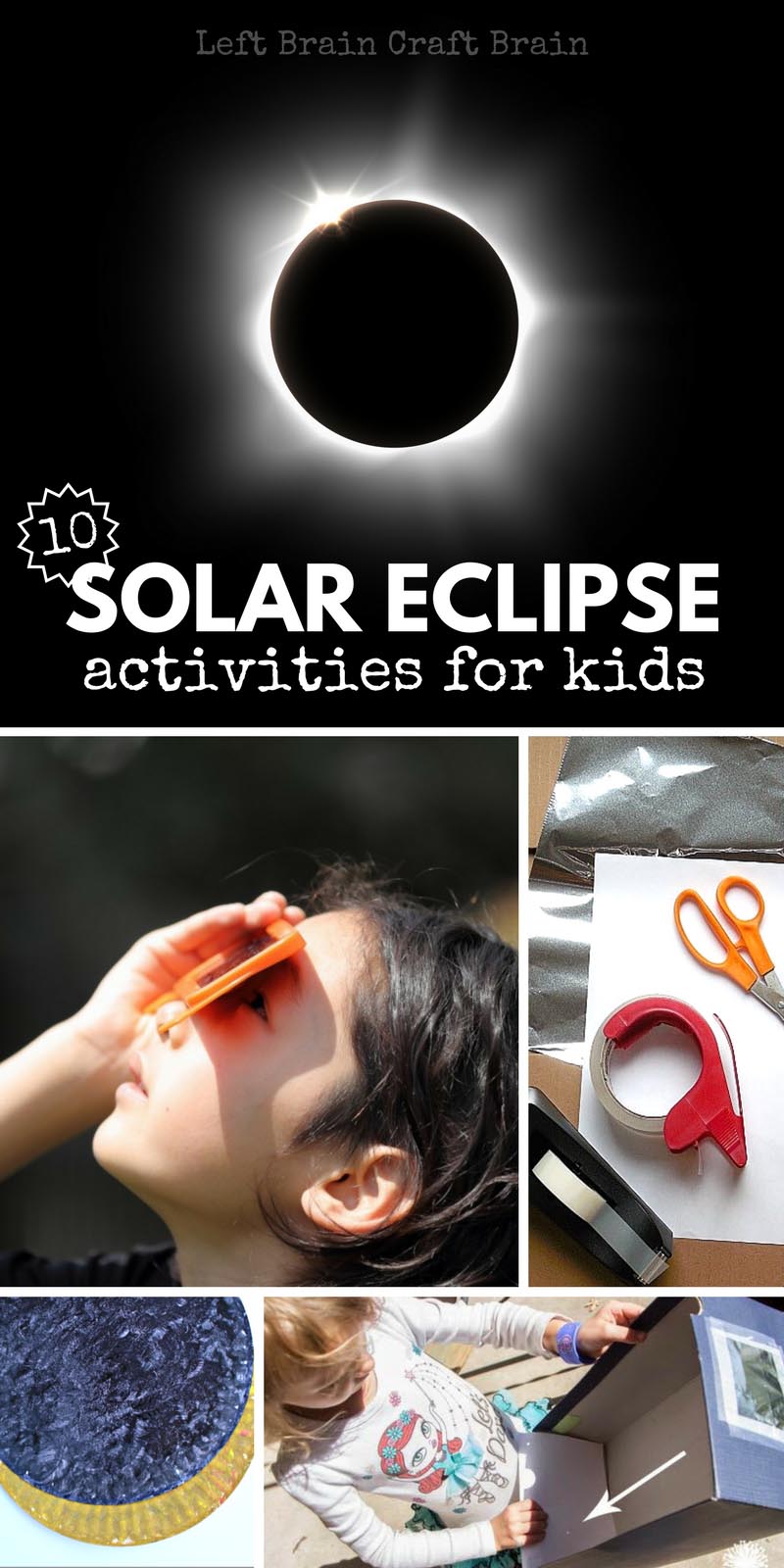 What is a Solar Eclipse?

A solar eclipse occurs when the moon passes between the sun and the earth and creates a shadow with the sun’s light. Three things have to be true to make solar eclipses occur: 1) There is a new moon which means the side of the moon lit by the sun is facing away from the earth. 2) The moon has to cross the path of the earth’s orbit. And 3) The moon’s location in its orbit must be in its closest position to the earth possible.

Here’s a diagram of what’s happening during an eclipse. 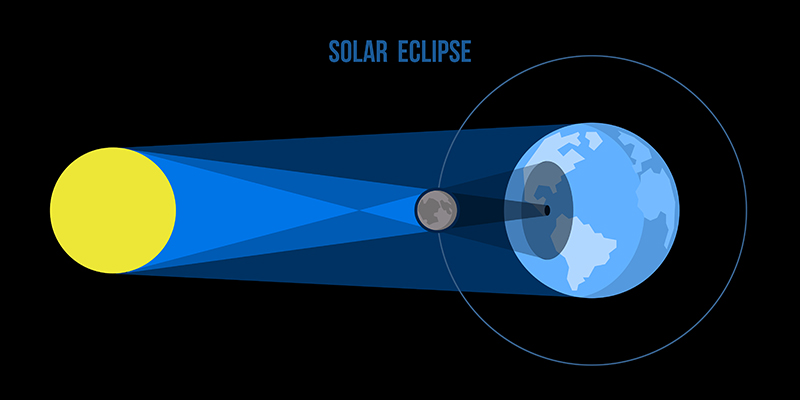 A total eclipse is when the sun is completely blocked by the moon. The path of totality is the area on earth where the full shadow occurs. Want to see if you’ll get to see the total solar eclipse on August 21st, 2017? Here are some amazing maps of the US from NASA that show the path.

Since solar eclipses don’t happen that often, it’s fun to do an activity to celebrate and learn about the phenomenon. Here are some of my favorites. 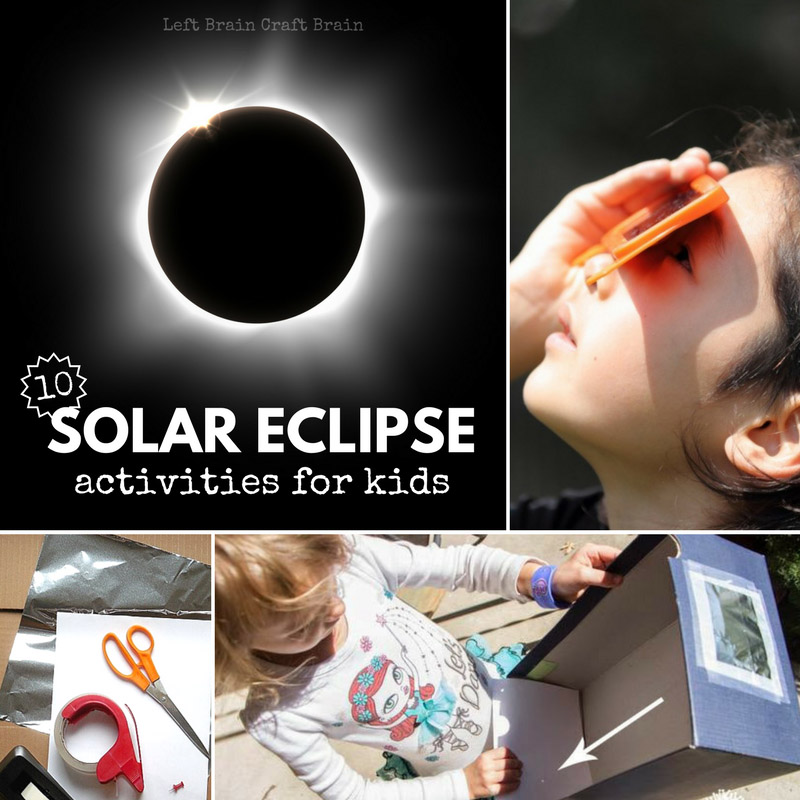 How to Make Sure You Are Going to See the Solar Eclipse: It’s going to be awesome! And you don’t want to miss it. Check out these tips for making sure you are read and see as much of the eclipse as possible!

Printable Constellation Cards & Projector: During the eclipse, it will be so dark you can see the stars. Study up on your favorite constellations before the big event then see if you can spot them in the darkened sky!

Total Solar Eclipse Painted Paper Plates: This is a fun, quick craft you can do with the craft stash you have at home. Talk with your kids about how the moon and sun will seem like the same size while the moon passes in front of the sun for the few minutes we are able to see it!

How to get kids ready for, and excited about, the Great American Eclipse: There are so many things to do to prepare for the total American eclipse. This is the first time in 99 years that the eclipse will be seen from coast to coast!

Make a Pinhole Viewing Box to Safely Watch the Solar Eclipse: It’s never a good idea to look directly at the sun. Making a pinhole box is a great way to view the solar eclipse while keeping your eyes safe.

Solar Eclipse Craft for Kids: I love how easy it is to make this craft! Talk about the rotation of the moon around the Earth and how the sun will look during the total eclipse.

STEM Activity: Build a Pinhole Projector!: I do love a good DIY project! Grab a box from your recycling bin and make a projector to be able to see the sun safely.

Coffee Filter Solar Eclipse Craft: Coffee filters get a new twist! Make a solar eclipse craft during your study of the solar system and be ready to see the eclipse in real time.

How to Make a Pinhole Camera: If anyone is going to know about making a pinhole camera it’s going to be NASA! Make your own in just a couple minutes for your next study of the sun.

Making a Pinhole Solar Eclipse Viewer: DIY and recycled viewers are so much fun for kids to make! Be sure to impress the importance of not looking at the sun to your kids when you venture outside on August 21st!

Astronomy for Kids: The Sun, Moon, and Earth: Make a model of the eclipse with a few balls and a flashlight for a fun activity even the littles can understand.

As you’e probably heard, it can be really hazardous to your eyes to look at the sun and the eclipse directly. So always protect them with special glasses or use viewers to indirectly see the eclipse. These glasses are certified ISO and CE certified to be sun safe. 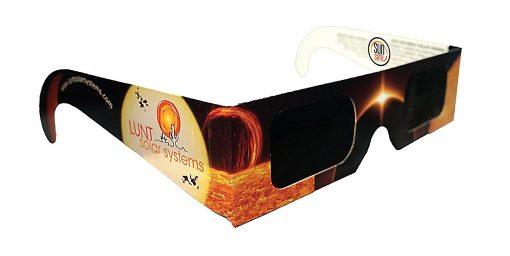 Plus, while you’re grabbing your glasses, be sure to pick up this super cute Eclipse t-shirt! 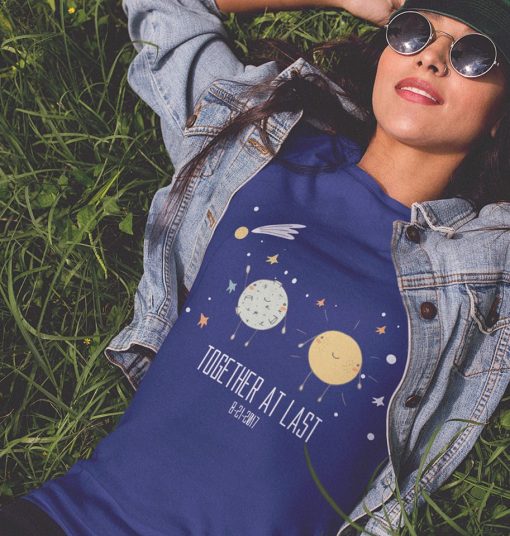 Only have a few minutes to whip something up to view the eclipse? Try this free Printable Eclipse Projector. 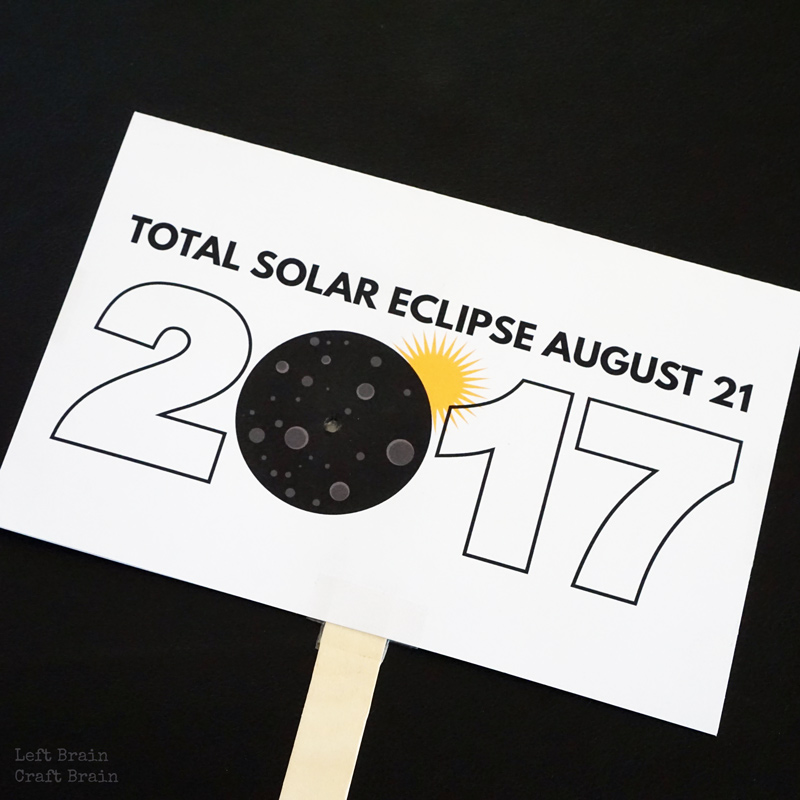 I'm an ex-engineer, current stay-at-home mama who writes about crafty ways to encourage brain power in our kids. STEM / STEAM projects are my fave. Read More…