Everyone loves a great magic trick, especially kids! You and the kids will practice your math skills while having fun with these easy math magic card tricks. We’ve included three of our favorite magic tricks that anyone can try plus a helpful set of showmanship tips to help you wow the crowd and yourself!

Please note, as an Amazon Associate I earn from qualifying purchases. This is at no cost to you.

It’s believed that playing cards originated in China in the 9th century and there are written records of playing cards from Europe in the 1300’s. They’ve always been used for games and magic card tricks began as ways to cheat at gambling. People tried lots of methods to get away with cheating from sleight of hand movements to counting cards. Luckily you don’t have to cheat to have fun with card tricks!

You don’t need much to do these magic card tricks. Playing cards, of course. We like these jumbo playing cards for the kids. You’ll also need an audience of at least one since these tricks are interactive. It also helps to have a flat surface.

Plus, to make learning and performing these math magic card tricks easier, you can have a printable set of instructions emailed to you. It also includes a set of helpful magic showmanship tips, too. Simply enter your info below to have the printable emailed to you. 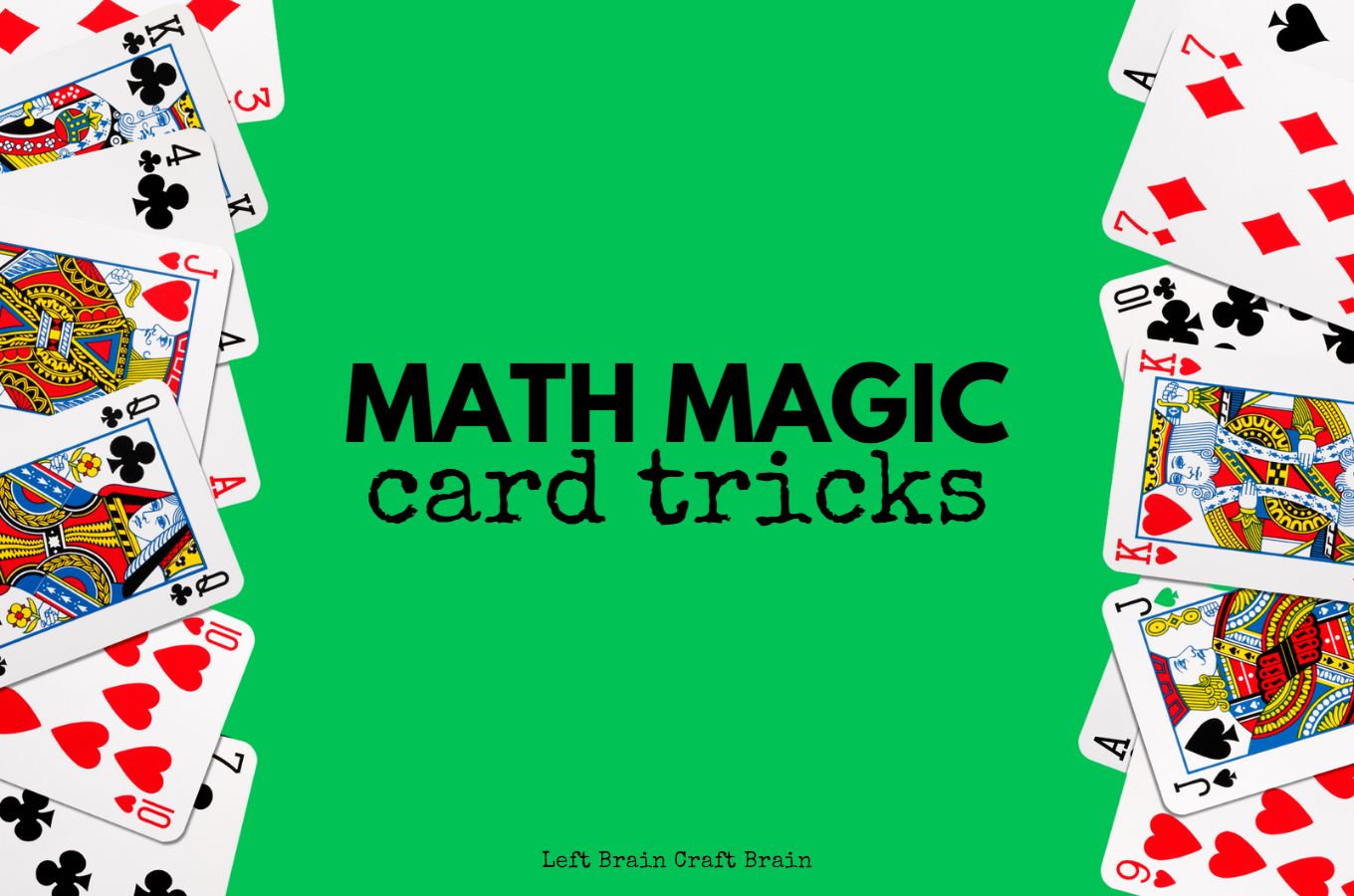 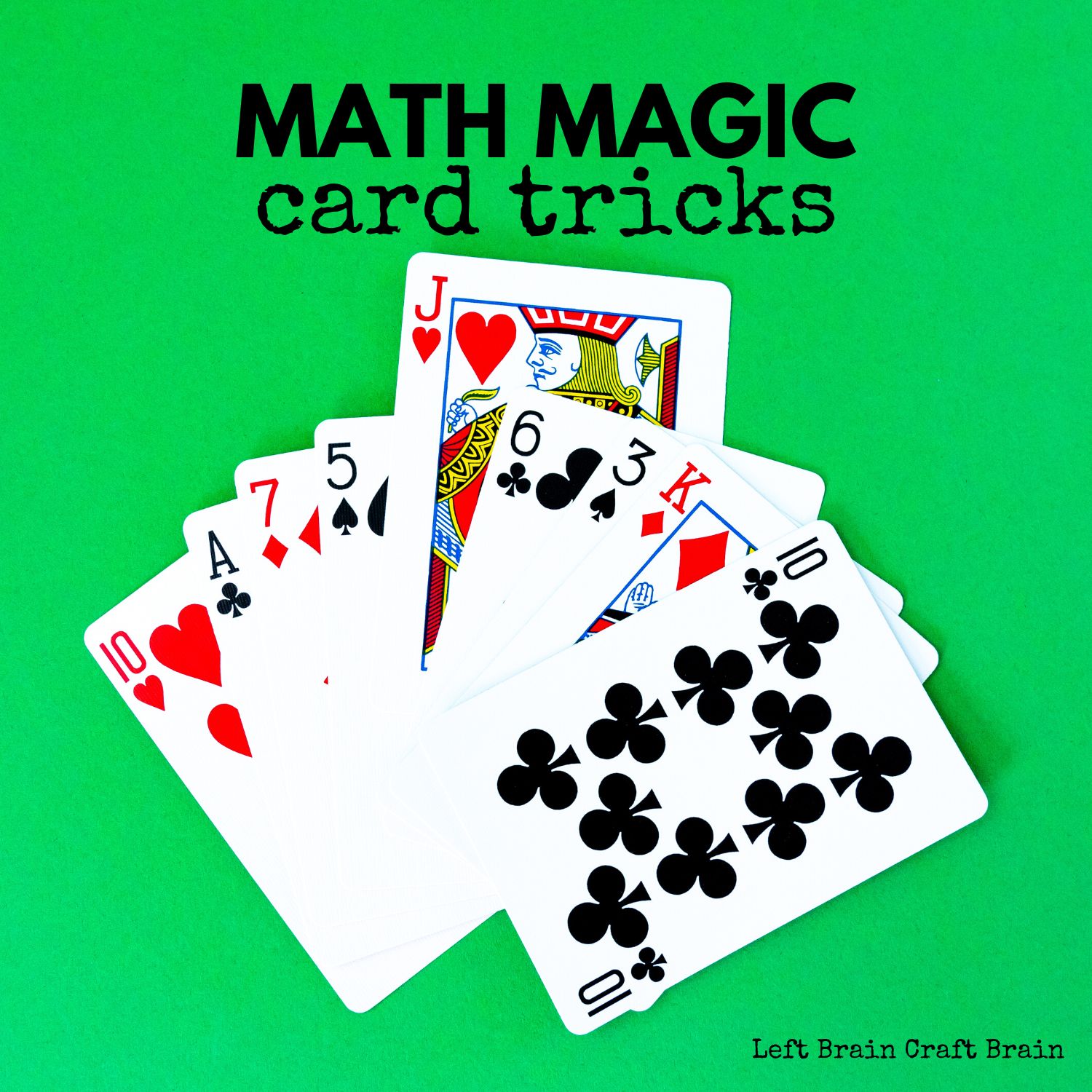 How to Do a Playing Card Magic Trick

Magic card tricks are easy when you know the secrets! But just like any new skill, getting the tricks ready for an audience takes practice. When you’re trying to learn a magic trick, first try it on yourself to see if you can figure out how it works. Try playing with the cards face up so you can see what’s happening! Now on to three of our favorite math-filled magic tricks.

In this magic card trick, you’ll guess an audience member’s card without revealing the magic math in the trick.

How to Perform the Math is Magic Card Trick:

This math trick works because by asking them to add three and multiply by 5, you’ve had them add 15 to their value. When you subtract 15 in your head, it helps you figure out where they started!

Pick a Card, Any Card Trick

In the Pick a Card, Any Card Magic Trick, you’ll find an audience member’s card by counting out the letters in the card’s name.

How to Perform the Pick a Card, Any Card Magic Trick:

The Pick a Card, Any Card Magic Trick Magic Revealed:

In the 21 Card Trick, you’ll guess an audience member’s card by dealing several rounds of 21 cards.

How to Perform the 21 Card Magic Trick:

With each deal of this magic trick, the audience member’s chosen card gets closer and closer to the middle stack, middle card. That’s because of how you deal the cards, one per stack at a time rotating through the stacks and because each time you stack the column with their card in the middle of the deck.

To help your audience believe in any magic trick, it helps to add some showmanship and entertainment to the trick. Here are some of our favorite showmanship tips. You’ll find these in the free printable math magic card tricks download, too.

There are lots of ways to have fun with magic with the kids. Want to wow them at the dinner table with a fun science trick? Try this Smoking Fingers Magic Trick.

Or, grab a whole set of STEAM-filled magic. These math magic card tricks are a sneak peek into one of our favorite books.

Make some magic with the STEAM Explorers Magic Ebook! Inside you’ll find magic illusions, tricks, and transformations loaded with the power of science, technology, engineering, art, and math.

!
!
Terms and Conditions checkbox is required.
SEND ME THE PRINTABLE
Something went wrong. Please check your entries and try again.
Scroll to Top
This site uses cookies to provide basic functionality and improved security. We also use 3rd-party cookies to improve your browsing experience and for targeted advertising. OkView our Privacy Policy