Today’s Five Minute Craft is a bit of an art history lesson as well.  Introducing Wassily Kandinsky, the father of abstract art.  Kandinsky for Kids Process Art is a great invitation for open art exploration and learning at the same time. 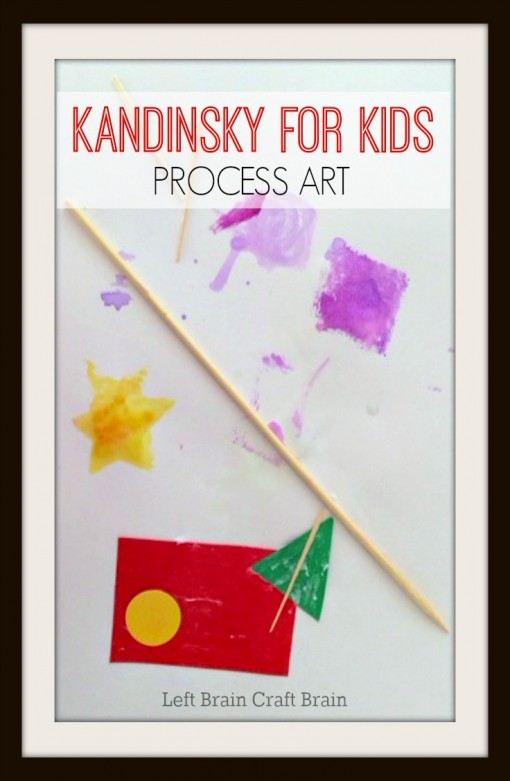 We have a few Wassily Kandinsky posters hanging in our house. Since I was first introduced to his work in college, I’ve been fascinated by his mixtures of color, shape and texture. Knowing that The Babe is also a shape/color/texture kind of girl, I thought this would be a good first artist to introduce her to.  You’re never too young for art history.

Kandinsky was born in Moscow in 1866 and spent the early part of his career as a lawyer. He was always drawn to his artistic side and in 1896 decided to spend his time painting. He later moved to Germany and joined the Bauhaus School of Art and Architecture (home to other influential creatives such as Piet Mondrian and architect Ludwig Mies van der Rohe).  He ultimately settled in Paris where the abstract paintings he created are considered some of his most important works.

Kandinsky’s Bauhaus period saw an increased fascination with geometric shapes.  He studied the geometric aspects of every painting and especially the Point, the Line and the Plane. The Point is the element the artist places on the painting, such as a touch of paint or a shape like a triangle. The Line is the product of the force applied by the artist and gives motion to the element. The Plane is the surface on which the artist uses the Point and the Line.  He theorized on how each of these elements impacted the viewer of the painting.  For example, he believed that the circle is the most peaceful shape and expresses the human soul.

His painting Composition VIII is where I got my inspiration for an art project for The Babe.  She created a mixed media compilation using paper shapes, wood BBQ skewers, toothpicks, foam stamps, glue and watercolors and we talked a bit about geometry, too. 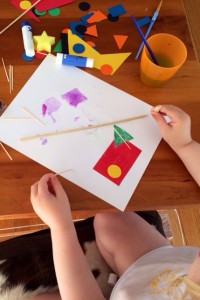 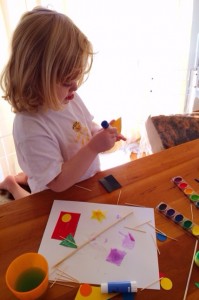 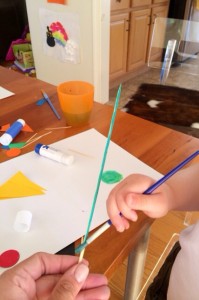 The best part about Kandinsky inspired art?  It’s very much a use what you have kind of deal.  Spaghetti, cotton balls, and foam shapes would all be great things to use here.

The Babe asked me to help her paint the skewer blue.  When we were done she said to me: “Now you’re a true artist.”  :)

Do you have a favorite artist that has inspired you or your kiddo? 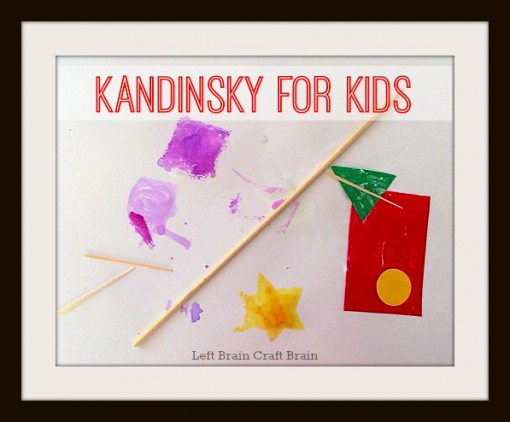