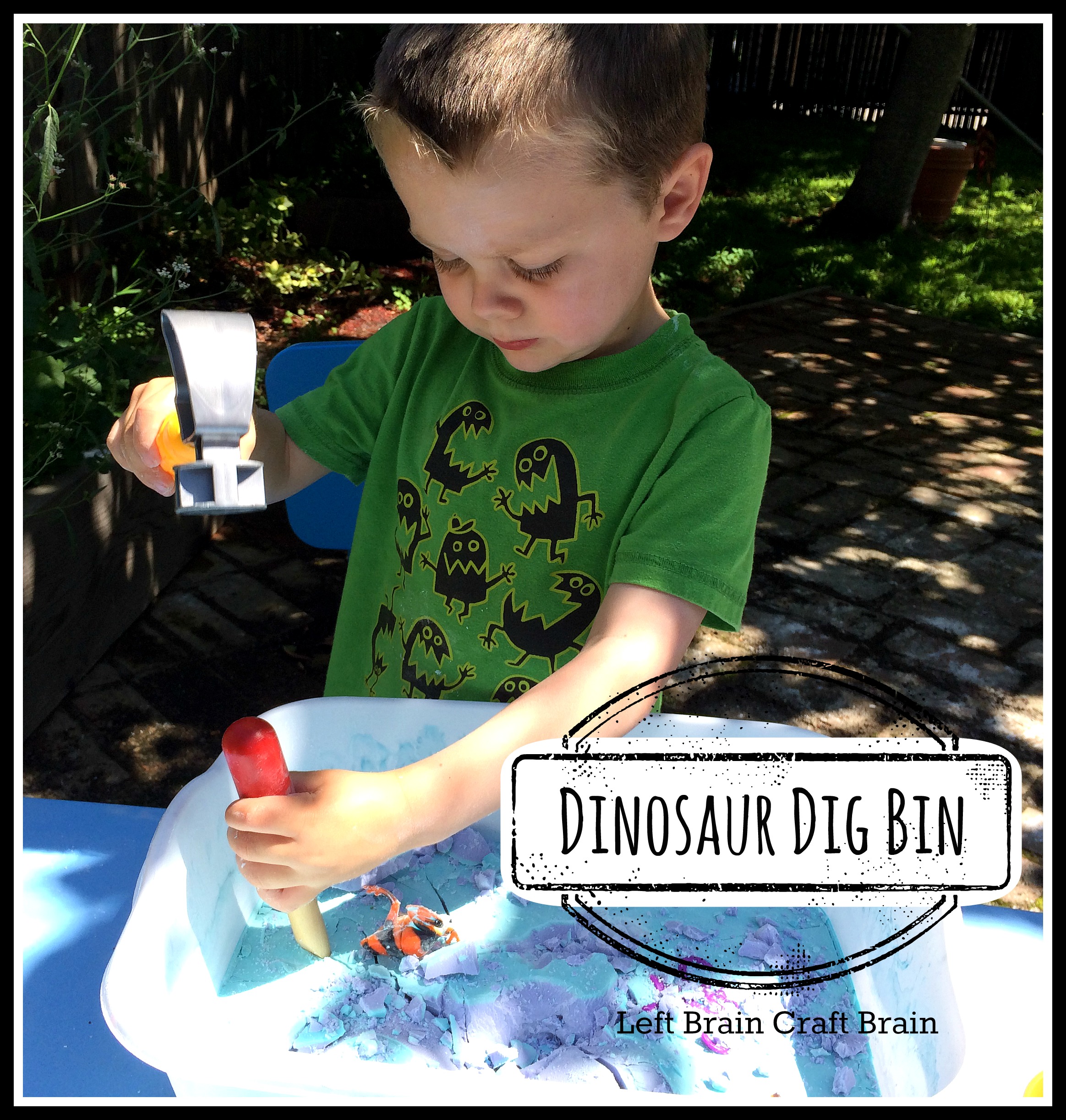 Today we’re digging for dinosaurs and I’m welcoming my good friend Alison to Left Brain Craft Brain.  She created this dinosaur dig bin for her LittleMan.  Alison is a full time mom to the very active, three year old LittleMan.  In a previous life she was a feature film animator, and is currently illustrating a children’s book entitled ‘Nothing Goes Up Your Nose!’  Because sometimes you just get tired of saying it….

Take it away Alison…. 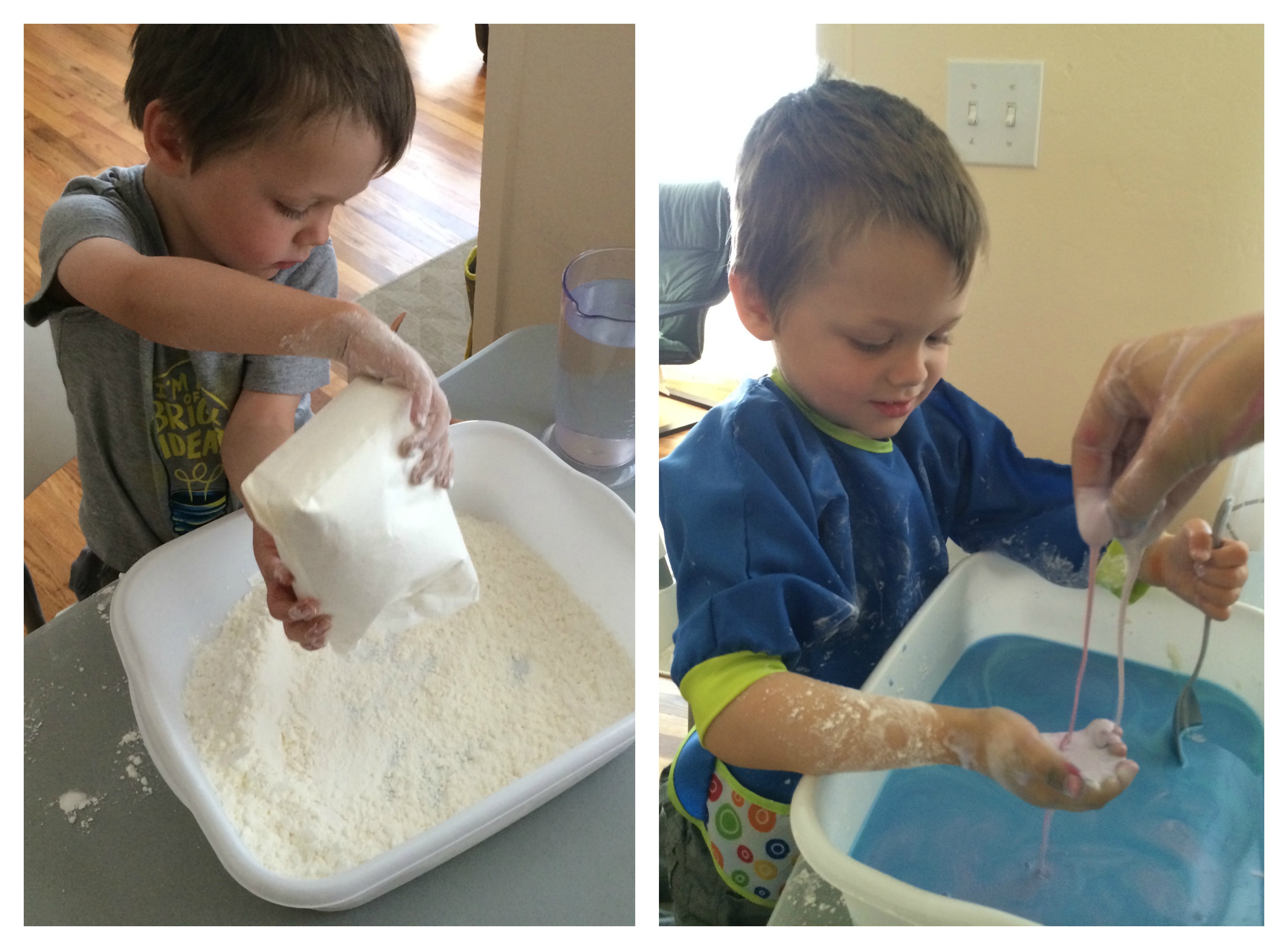 I discovered something pretty cool the last time we made goop. If you let it sit neglected in your backyard for several days it dries out completely & goes solid again. Not only does it go solid it kinda looks like a desert, all dried & cracked. And when you pry it up out of the container, it keeps its shape!  I was instantaneously reminded of two things: 1) the episode of How It’s Made that shows how gummy worms are made by molding them in cornstarch and 2) the dinosaur fossil kit that my 3 yr old has been lusting after every trip to the toy store. So… I put it all together for homemade dinosaur dig!

First create the largest tub of goop you can manage.  I used 3 Target boxes of cornstarch & that worked out well. Goop for the uninitiated is cornstarch & water & a bit of food coloring. Usually when we make goop I try to add just enough water to make it malleable & interesting to the touch. This time I added more water & we mixed & mixed till it was totally dissolved into a liquid. LittleMan really like helping with this part & adding the food coloring. 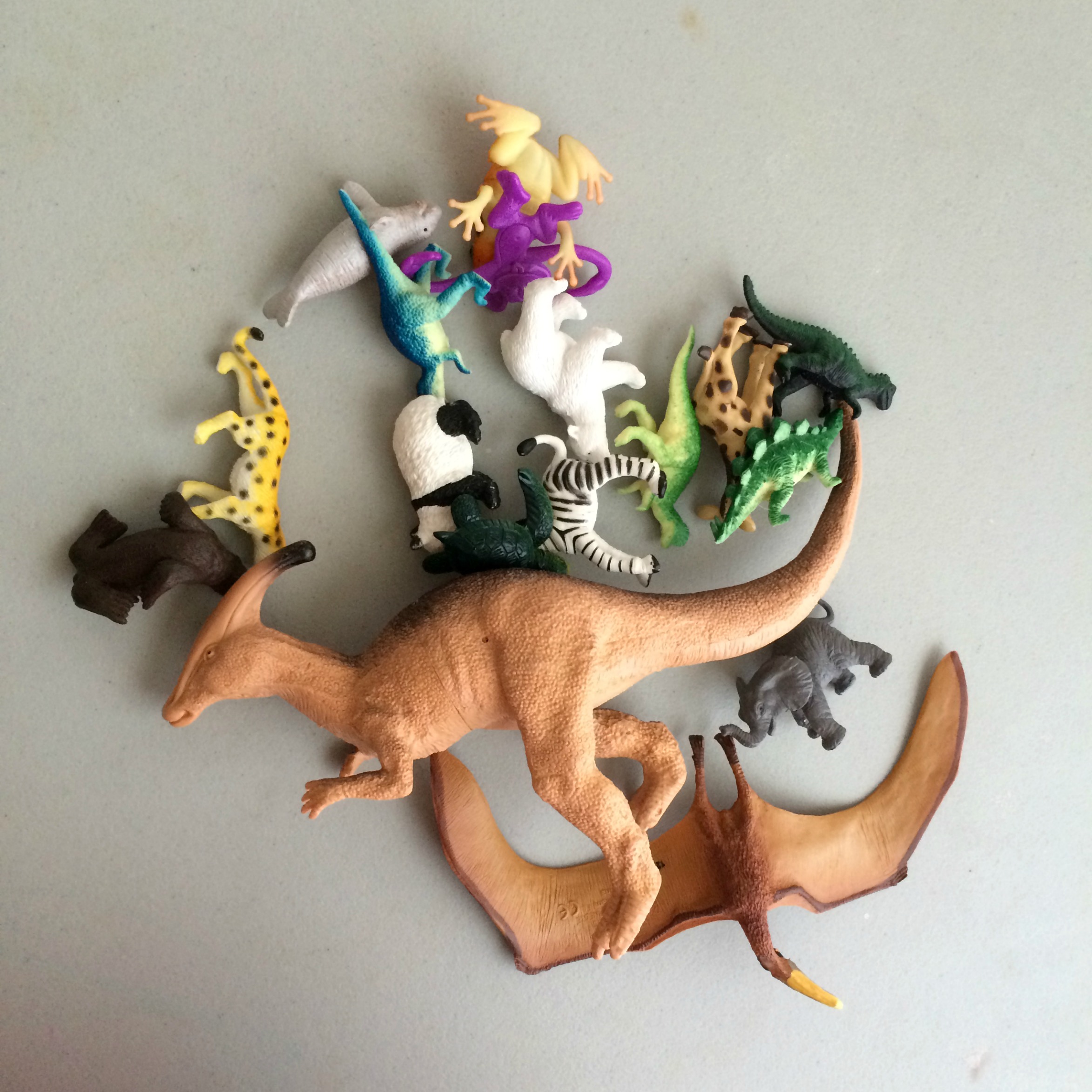 Then came the animals. We dropped them in & let them sink. I found an extra elephant a little while afterwards & put him in his own little container with a few scoops of goop. The nice thing about this was he was ready a bit earlier than the main tub. The elephant was ready the next day, the main tub the day after that. I found that it dried a lot faster out in the sun that indoors.

Finally it was EXCAVATION time!!  LittleMan was extremely excited & sang to himself most of the time he excavated.  We used his hammer & screwdriver from a toy tool set & an old brush I had lying around. We talked about dinosaurs & fossils while he pulled great big hunks of the stuff out. To be honest he really enjoyed just the way the final cornstarch mass sheared away & broke & crumbled in his hands. I pointed out the fossil type shapes left from the animals & he was vaguely impressed. The ‘excavation’ took up most of an afternoon. I would recommend doing this outside as it can get pretty messy.

Overall this was a big hit & an enjoyable way to spend a few afternoons (making it, checking on it & excavating it). It’ll be an interesting one to try again in a few months or a year to see if his thought process & interests have changed from ‘I just want to smash that’ to ‘let’s look at the imprints’.